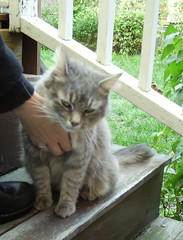 mzrowan discovered a family of cats outside her window. After we watched them for a while, she went out with a bowl of food and a cat carrier, but mom cat was hissy and they ran off, so she just left the stuff there on the back stairs... and before she got back to her room, mom cat was already inside the box. We watched the kittens approach, one by one.

Here's where they've been hiding until now.

All four of them spent the night in the box, and this morning the bowl of food was empty, but now mom cat has decided that apparently people are great! 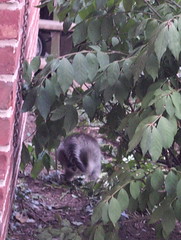 The kittens, however, are not yet convinced, and snuck off under the bush behind the back wall of the house.